Vernon, CT to East Thompson, CT at the Tri-State Border

Rail Tales is a sub-24 hour overnight (S24O) point-to-point route from central Connecticut to the Tri-State Border Marker at the CT/MA/RI line that links together multiple rail trails for a look at the state’s dynamic railroad history and once-booming industrial past. This is a beginner-friendly route, with smooth gravel terrain, country roads, and minimal pavement miles.

This ride is a point-to-point route that links together three gravel trails that were once important railroad lines for Connecticut’s thriving industries. The trip begins at a trailhead for the Vernon Rails-to-Trails Rockville Spur, and heads south on the stone-dust trail for a little over 3 miles. One point of interest early on is the I-84 underpass. In the space between the tunnels there are colorful murals on each side, showcasing the talent of local artists and children. The new mural that was being painted during our trip has since been completed; a plaque titled “Art Transforms an Abused Space” details the collaboration with the town, local artists and art students, and grant donors.

At the southernmost trailhead for the Rockville Spur you’ll come upon the Vernon Rails-to-Trails Park, which was once the site of a train depot for the Hartford, Providence & Fishkill Railroad. This particular rail spur was constructed in 1863, but now the park acts as an outdoor museum, with remnants of rail still remaining, and panels installed with text and historic photographs that outline the railroad’s role in Rockville’s once booming textile industry.

From here you’ll continue eastbound on the Hop River State Park trail, a 20-mile crushed stone path that continues to follow the main route of the Hartford, Providence & Fishkill Railroad. Passing through two state parks early in the ride, of particular interest is Bolton Notch State Park, where the trail cuts through steep rock faces that seep moisture and turn into stunning jagged ice in the winter. Here is your first opportunity to filter water if needed. Bolton Notch is also the eastern terminus of the Charter Oak Greenway, a paved, more-urban 16-mile pathway through Hartford’s suburbs, so there are plenty of opportunities for mixing up scenery on this route. Both the Hop River Trail and the Charter Oak Greenway are part of the expansive East Coast Greenway, which connects multi-use trails from Maine to Florida.

At the junction between the Hop River Trail and the Air Line State Park Trail (the final rail trail for this journey), lies the Connecticut Eastern Railroad Museum, in Willimantic. The museum is located on the original site of the Columbia Junction Freight Yard. Passing through Willimantic’s downtown before reaching the Air Line Trail, you’ll see the four large copper frogs sitting atop concrete thread spools that adorn the Thread City Crossing, the bridge that crosses the Willimantic River. Also known as Frog Bridge, it was designed and named after the story of “The Battle of the Frogs”, in which town residents in 1754 thought the French were coming to town to attack due to a large-scale death of frogs in a local pond.

You’ll make camp at the General Lyon Lean-to on the blue-blazed Natchaug Trail, which is a short 2.5 mile detour off the Air Line Trail on unpaved farm and forest roads. General Nathaniel Lyon was the first Union general killed in the Civil War; here you’ll see a large stone chimney which is all that remains of his birthplace. Day 2 continues eastbound on the Air Line trail, which spans over 50 miles to the Massachusetts border. At the state border the trail continues into Douglas State Forest as the Southern New England Trunkline trail. You’ll see the CT/MA state marker just off trail, and a small hike-a-bike detour following the footpath from that marker will lead you to the CT/MA/RI tri-state marker. 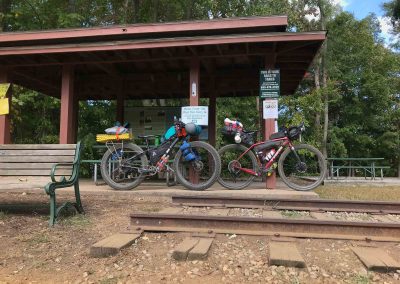 Terms: Routes on Rockgeist.com are partial planning resources only, primarily for providing potential locations and initial mapping, and may not cover trail surface and challenge details. Please complete your own research before starting your trip. These routes are often remote and require proper knowledge of safety; including bike repair, bail out options, navigation, and resupply locations.  Additionally, because of the remote nature of these locations, you may not have access to wireless or cellphone when onsite.  You should also be aware of and prepared for weather and conditions.  Users are required to obey all road, land, and trail rules, while practicing Leave No Trace principles.  While all routes are diligently prepared and presented, Rockgeist does not guarantee accuracy of routes, trail conditions, or any points of interest detailed herein. It is your intention to fully assume all risks when following these routes. Rockgeist LLC, its collaborators, partners, or volunteers are in no way liable for actions, personal injury, damage to property, or any events that arise directly or indirectly from the routes presented on Rockgeist.com.